The government says lynx won’t cross a road, a pipeline, or a ski area.  But mountains, rivers, and plains don’t seem to be a problem.

In 1943 “Lassie Come Home” was an international box-office sensation, a Technicolor tear-jerker about the long, difficult journey home of a dog separated from his owner by hundreds of miles of wild country, bad weather and mean men.  They’re still making sequels, story books, and TV shows 60 years later.  But Lassie’s dramatic journey into the hearts of millions was nowhere near as impressive as the recent trek home of a Canadian lynx named “BC-03-M-02” – and Hollywood didn’t even notice.

Maybe the Colorado Division of Wildlife could have found more marketable names when some 200 Canadian lynx were introduced into the State as a way to recover an extinct population in the Southern Rockies (hindsight is always 20-20).  Movies, books, and TV shows could have highlighted the incredible achievements of these amazing animals – and “BC-03-M-02” would not have been the only star.  His accomplishment should be legendary by now: he was captured near Kamloops, British Columbia in 2003, brought 1,350 miles to Southern Colorado and released into the wild to find his own way.  And he did.  Tracked by a radio collar every step of the way, he settled in, ate well, found a mate, and sired at least two litters of kittens before disappearing off the radar in 2007.

No one was surprised when he vanished.  Numerous other lynx in this experiment had died: a few starved to death, several were shot by mean men, a few hit by cars, and some turned up dead for no apparent reason – perhaps some just lost the will to live with so much regulation and government meddling.  But many others established large territories and wandered brave distances, to the everlasting embarrassment of the U.S. Forest Service.  That agency had claimed these remarkable cats would only eat snowshoe hares, so their population would rise and fall with the rabbits – but these lynx eat snowshoe hares, other rodents, squirrels, prairie dogs, birds, and even an old lady’s dog in Durango.  The government said ski areas would destroy lynx habitat – but one of the cats actually lived on a ski slope through an entire winter season and apparently enjoyed it.  The government said lynx couldn’t live further south than Colorado – but several have moved to New Mexico, apparently unaware of the state line.

Most shockingly, the Forest Service said lynx would not/could not cross open areas greater than 100 yards; they would only survive in dense forests where there were no people – but no one told the lynx.  Thanks to radio collars, the real behavior of these animals is now well documented.  Some crossed the San Luis Valley, one was recaptured after crossing the Great Plains to Wakeeney, Kansas, and several have been tracked north across Wyoming and even Montana.  But the Oscar goes to lynx “BC-03-M-02,” which had not vanished forever, but literally trudged all the way back to Canada – without a GPS system.

The cats have survived well in Colorado, despite the stubborn existence of towns, roads, vehicles and 5 million people.  The Forest Service theories were not based on science, of course, but on their desire to use lynx as an excuse to halt ski area expansion, close roads, ban snowmobiles, stop logging, mining, oil and gas exploration, and grazing.

We brought lynx back to Colorado for a simple reason – environmental decisions ought to be based on science, not political agendas.  People can argue about the desirability of snowmobiles, ski areas, ranching, logging and energy production – arguing is recreation for westerners.  But those disputes are not really about the lynx – they continue to eat, sleep, drink, and make kittens, as if completely unaware of this flurry of activity on their behalf.  The poor animals are simply caught in the cross-fire because of the awesome regulatory power of the Endangered Species Act, the biggest tool in the toolbox for stopping human activity.  So in Colorado we decided to recover the species, so they would no longer be threatened – nor would our use of the national forests.  Today, Colorado’s healthy lynx population is among the great success stories in the history of conservation, though the government can’t admit it. 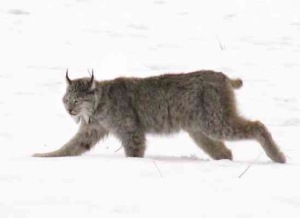 The classic tragedy in this story is lynx “BC-03-M-02.”  He made the amazing expedition of over 1,200 miles, but almost within sight of his destination back in Kamloops, he was caught and killed by a trap near Nordegg, Alberta on January 28, 2010.  Only a couple reporters have noted the significance of that journey, but there is still time for Hollywood to catch up.  The good news, of course, is his two litters of kittens – at least 6 in all – whose existence provides hope for the first of many sequels: “Son of BC-03-M-02.”

This entry was posted in Public Lands, Wildlife & Endangered Species. Bookmark the permalink.